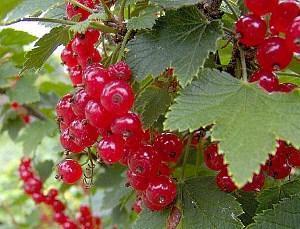 It is difficult to imagine any garden plot without a currant bush. Red currant is a common shrub in the European part of Russia, with which only black currants, raspberries or gooseberries can compete in popularity. The unique ability of red currants to winter at a temperature of -45 ° C allowed it to conquer the vastness of Western and Eastern Siberia, as well as the regions of the Far East. Although red currants are planted a little less often than black currants, however, it is its fruits that contain pectin and coumarins, which prevent heart attacks and remove heavy metals from the body. Red currant fruits are an excellent product for making fruit drinks, compotes, jelly and wine. Of course, ideally, red currant berries, and any other berries, are best consumed fresh, as they say, from a bush, but the freezing method is also perfect for it, in which the berries retain the entire spectrum of vitamin substances.

When is it better to plant red currants? Currants are planted both in spring and autumn. But, due to the fact that the process of vegetation of currants in spring begins very early, then it is better to plant it in the fall.. 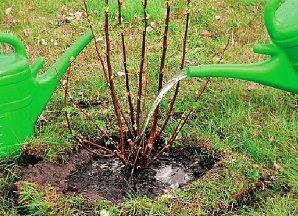 It is advisable to plant a red currant shrub in slightly elevated, well-lit areas. This plant prefers loose loamy and sandy loam soils. It does not make high demands on nutrients in the soil, but with a significant lack of them, it can throw off some of the set fruits. When planning to start planting red currants in the fall, you need to take into account that they usually do this in September..

How to properly plant red currants in the fall? Planting should begin with the preparation of the landing pits. Three weeks before planting the shrub, it is necessary to dig a hole 40 cm deep and 60 cm wide. 2 buckets of humus are poured onto the bottom, a complex mineral fertilizer is added, covered with fertile soil and watered. This is done so that the soil is compacted..

After the time indicated above, immediately before planting, the roots of the bush are shortened, and the plant is buried 7-8 cm above the root collar and buried. This planting promotes the growth of additional basal buds, which are designed to form a lush bush.. 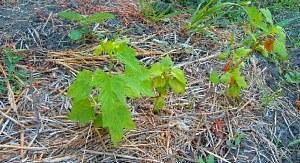 It is important here to plant the bush in the upper, non-fertilized soil layer. Otherwise, the plant will immediately begin to build up green mass, and the fruiting process will slow down. The planted bushes are watered, the stems are trimmed, shortening them at a height of 25 cm from the ground with 3-4 buds. The soil around the bush is mulched with hay, straw, peat or dry leaves to retain moisture.

After planting, when the soil is slightly frozen, the red currant bushes are sprinkled with humus, which will protect the roots from moisture stagnation and serve as an additional shelter from frost.

The main points to follow when planting red currants:

By providing the shrub with proper and competent care, you can achieve good yields that will delight their owners for 25 years..

Having planted red currants, further care for it consists in weeding, mulching, watering and loosening the soil.

Red currants are drought-resistant, so regular abundant watering is not necessary for it. To preserve moisture in the soil, it is rare but abundant to water the bush and mulch the trunk circle.

Fertilizers applied when planting a bush will provide the plant with top dressing for two years, but over time, when the soil is depleted, additional nutrients will be required. Fertilizers are applied in the fall, in the form of manure or chicken droppings diluted in water in a ratio of 1:10 and 1:20, which will penetrate deep into the soil with rains and melt water. Mineral fertilizers are applied in spring – 80 g of ammonium nitrate per bush.

What is red currant pruning for??

Pruning is of great importance for red currants, which is aimed at the correct formation of the bush, increasing resistance to diseases and ensuring regular high yields, which does not allow the fruits to shrink. 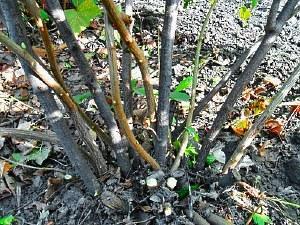 In the bushes of red currant, the shoot-forming ability is not clearly expressed, and the fruiting of its bouquet branches lasts up to 10 years. Based on this, the bushes do not need radical pruning. For the formation of currants, it is more important to maintain sufficient thickening, and regularly remove zero-order shoots, leaving literally a few branches to rejuvenate the bush..

If it was decided to grow red currants in a trunk, then all zero shoots are removed, and a pinching is carried out with a growing shoot to stimulate branching and the formation of more ringlets (fruit branches). Regular pruning is carried out only if it is necessary to remove damaged, thickening and growing branches in the ground.

It should be firmly remembered that neglect of the pruning procedure can cause a significant decrease in yield and the appearance of diseases and pests on currants, which quickly spread in thickened stems.. 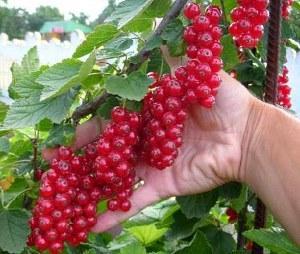 Bushes should be constantly examined and cut branches affected by diseases and pests. For the prevention of diseases, it is recommended to treat the bush with 1% Bordeaux mixture a couple of weeks after flowering and after removing the fruits. Also, for pest control, it is good to use milk of lime with a solution of copper sulfate 4%. With this mixture, the bushes are processed in the spring until the buds open..

By following simple tips for planting and caring for red currants, you can grow a decent harvest from fruits rich in vitamins and please yourself and your loved ones with them..

Garden
Previous Post
Acquaintance with raspberries Pride of Russia or heroes in Russia still remain
Next Post
Why is a trellis necessary for growing blackberries?