How to propagate currants in the shortest possible time 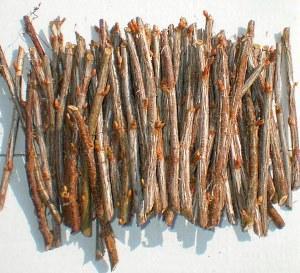 Despite the fact that currant planting material is sold in nurseries, many people prefer to reproduce it on their own. This is especially true of the most valuable specimens. When grafting in one year, the required number of new bushes is obtained, which have all the advantages of a mother plant. There are several effective ways to propagate this culture:

Propagation of currants by lignified cuttings

This method is one of the most effective and efficient. When used from an annual branch, you can get some excellent cuttings. Their length is approximately 20-30 cm. The diameter of the cutting is 6-8 mm. The kidneys on it should be intact. The apical cut is made with a sharp instrument (pruner, knife) 1 cm above the kidney. In this case, the non-lignified top is completely removed. An oblique cut is made under the lower kidney. Roots are formed under the kidneys and between the knots of the cutting. Planting lignified cuttings can be done both in spring and autumn. In the spring, harvesting planting material is often combined with cutting off bushes.. 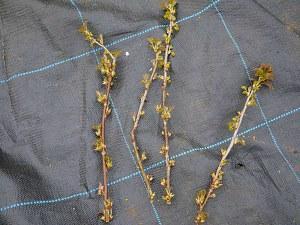 Cuttings are cut exclusively from healthy specimens of currants. They are planted in the so-called “cuttings” (most often it resembles a V-shaped trench) with a nutritious earthy mixture consisting of fertile soil, compost, rotted manure. Planting depth is about 15 cm. 2-3 buds are left above the ground. Prepare such trenches in the fall.

In early spring, when the soil is saturated with moisture, lignified cuttings are planted in it. The soil in the cuticle should be dug onto the bayonet of the shovel. Wet soil promotes rapid root formation. When planting in the ground, the interval between cuttings should be 10-15 cm. When planting planting material in spring, it must be remembered that the earlier it is produced, the faster the result will be. The surface of the earth is mulched with peat or rotted humus. This procedure prevents the loss of moisture from the soil. The mulch layer should be 3-5 cm.You can also cover the soil with a dark film, which will not only retain moisture, but also prevent weeds from germinating. 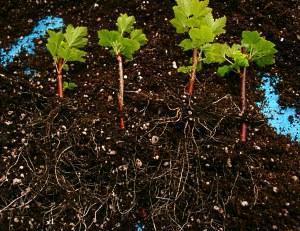 Some gardeners plant cuttings in small pots. Everyone can choose the method of planting cuttings individually. Sometimes experienced gardeners reproduce currants before winter. In this case, you must not miss the moment when the kidneys enter the resting phase. Autumn propagation of black currant is carried out in late September – early October. The planting of cuttings of other species of this culture begins much earlier – at the end of August. If reproduction of red currants is done later, the amount of well-rooted planting material will be significantly reduced. When planting cuttings in spring until autumn, perfectly formed young bushes are obtained, which are planted in a permanent place. Poorly developed plants are left in the cuttings until the next season..

How to propagate currants with green cuttings

If the gardener did not have time with the spring reproduction with lignified cuttings, then he can resort to obtaining young plants using green non-lignified shoots. Good planting material should not break when bent. Reproduction of currants in this way occurs in stages: 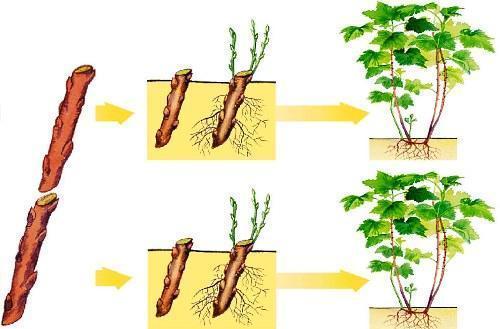 This breeding method is used for all types of currants..

Reproduction of currants by layering 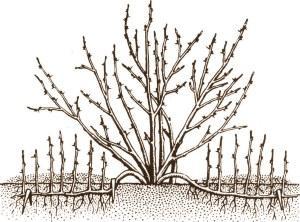 This method is suitable for all types of this culture. In the process of reproduction, suitable layers of a healthy bush are added with earth in the spring. To obtain excellent planting material, 2-3-year-old layers are laid in small grooves dug out near the bush to a depth of 10-15 cm. A mixture of compost, peat, rotted humus is poured into them. Layers are fixed in the ground using metal or wooden studs, after which they are sprinkled with nutritious soil. The formed mound is compacted.

By autumn, young roots are formed. They are separated from the mother bush, after which they are planted in a permanent place. During the year, beautiful young black currant bushes are obtained. It may take 2-3 years for white and red species to take root. The productivity of the mother bush depends on the type and variety of the plant. Up to 12 high-quality cuttings can be obtained from one plant in 1 year..